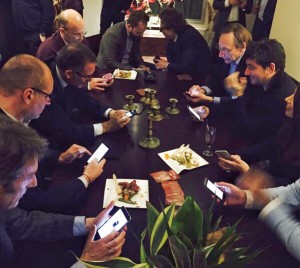 #JamaisSansElles is a movement that supports gender diversity, promoted by two hundred humanist entrepreneurs, players from the digital world, the media, education, and politics who are accustomed to participating in debates and public events, but who now refuse to take part if there are no women present.

Since the appeal was launched in March 2018 by the Ministry of Europe and Foreign Affairs to have the French Diplomatic corps join forces with #JamaisSansElles, thirty ambassadors and consuls have committed themselves personally as well as on behalf of their embassies.

About sixty French MPs and senators have joined the movement, as well as one MEP.

Benoît Thieulin, director of the Netscouade, former president of CNNum.

Gilles Babinet, chairman of the Board Captain Dash, former chairman of CNNum, Digital Champion representing France at the European Commission on Digital Issues.

François Momboisse, president of Fevad and Ecommerce_EU, founding member of The Transition.

Louis Dreyfus, publisher and chairman of the Executive Board of Le Monde Group.

Jacques Attali, writer, editorial writer at L’Express magazine, president of Positive Planet Foundation and of the A&A Group, chairman of the Supervisory Board of Slate.fr.

Thierry Taboy, vice president of CSR at the Orange Group.

Mathieu Jeandron, director of digital education at Ministry of Education.

Bruno Vanryb, president and founder at BE BRAVE, associated and senior partner AVOLTA.

Emmanuel Caillaud, university professor in mechanical and Industrial engineering at the University of Strasbourg.

Olivier Schimpf, co-founder and president of RA’pro (association for the promotion of augmented reality).

Luc Bretones, executive vice-president of the Orange Technocentre and head of Orange Vallée, vice president at Institut G9+ and Board Member at SoftAtHome.

Richard Remaud, former president of the French Federation of Badminton.

Yann Trichard, co-founder and CEO of Syd Conseil and president of the CCI (Chamber of Commerce and Industry) at Nantes St Nazaire.

Danish deputies of the Alternativet party.

Jean-Christophe Lagarde, president of the  UDI (Union of Democrats and Independents), Deputy Mayor of Drancy.

Julien Aguin, Municipal Councilor at Voisenon, member of the national office of the Young Radicals, Departmental Delegate of Youth UDI 77.

Philippe Augier, Mayor of Deauville, President of the Community of municipalities  “Coeur Côte Fleurie”, President of France Congress and Events.

Arnaud Ngatcha, communication and strategy adviser, head of Partnerships and Fight Against Discrimination with Laura Flessel, Minister of Sports.

Frédéric Lefebvre,  Lawyer, Former Minister and Member of Parliament for 92 and French living in North America (2007/2017) Co-Founder, Vice President of AGIR, President of the WNW

Max Jadot, CEO and Chairman of the Executive Board of BNP Paribas Fortis

Bruno Le Maire , Minister of the Economy, Finance and the Recovery

Marlène Schiappa, Minister Delegate for Citizenship, attached to the Minister of the Interior

André Bodson, Adviser to the French minister of Equality

Aside from the members of the Executive Committee, the members of the G100 (the group of the first 100 senior executives) of BNP-Paribas have been signatories of #JamaisSansElles since January 2021. They are present in more than 14 countries around the world.

In addition to the members of the General Management, the 52 members of the Societe Generale Executive Committee are also signatories of the #JamaisSansElles charter.

Minister of Economy, Finance and Recovery

Marie-Anne BARBAT-LAYANI, Secretary General of the Ministry of Economy, Finance and Recovery

Martin Vial, Director General of the Agency for State Holdin

Luc Rousseau, VP of the General Council for the Economy, Industry, Energy and Technology

The first French ambassadors, ambassadresses and consuls in the world and #JamaisSansElles signatories, who have committed themselves personally, as well as on behalf of their embassies.

Florence Provendier, LREM MP for Hauts-de-Seine, Member of the Committee on Cultural Affairs and Education

Eric Pouillat, LREM MP for Gironde, Member of the Law Commission. Vice-president of the Delegation for Local Authorities and Decentralization

IF YOU WOULD LIKE TO COMMIT, SEE THE APPEAL HERE